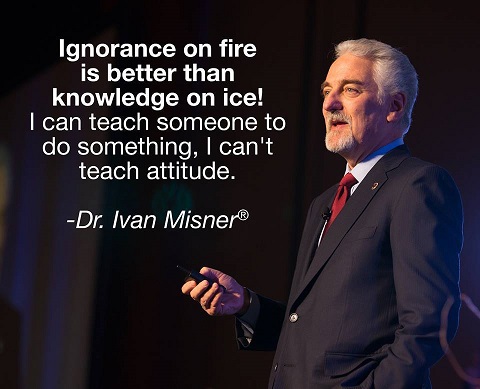 Positive Attitude is one of the core values of BNI and let me tell you it’s not always as easy as it sounds, to have a positive attitude. It is however, very important. In fact, based on a survey I conducted with almost 3,400 business people from all around the world, not just BNI members. Positive attitude was discovered to be one of the top two characteristics of a great networker. Positive Attitude. Come on think about it when people talk about what it takes to be a great networker, they don’t usually talk about this, but they should.

The first thing people see from you is your attitude, how you take things in general.

A consistently negative attitude makes people dislike you and drives away referrals. A positive attitude makes people want to associate and cooperate with you. Positive business professionals are like magnets. Others want to be around them and will send their friends family and associates to them. Look, life is too short to hang out with crabby people, surround yourself with people who have a positive attitude and are there to help you succeed. Believe me when I say: we become a lot like the people we hang out the most with. Surround yourself with people who have the right attitude.

When I spoke about this in certain region a few years ago. A member there told me that she really agreed with this sentiment. At one time there had been a member in her chapter who had a horrible attitude. She said; the best thing he ever did for the group was miss a meeting. She said he was a total fun sucker. He sucked all the fun right out of the room. It took me a full minute to stop laughing. She went on to say that the best thing that chapter ever did was invite him to leave the group, after that the chapter really started having fun following the system and most importantly generating a lot of business.

Think about it: Have you ever worked in an office where someone left or got fired and the entire attitude of the department Improved. I don’t know about you but I surely have, more importantly I’ve seen similar things happen in BNI. I’ve always said ignorance on fire is better than knowledge on ice. Find people with a positive attitude who are on fire and they will make fantastic members.

Remember, you become a lot like the people you hang out with. Hang out with positive people. We think this is so important that the BNI board of advisors made up exclusively of members actually included this in the BNI code of ethics. For decades now, I have had this plaque in my office, it’s a quote from Charles Swindoll. It’s the best quote on attitude I’ve ever heard.

We cannot change the past, we cannot change the fact that people will act in a certain way. The only thing we can do is play on the one string we have, and that is, our attitude. I am convinced that life is 10% what happens to me an 90% how I react to it, and so it is, with you and me, we are in charge of our attitudes one of the important core values of BNI.

Visitors, should we invite or register them?

Why is Attendance the Bare Minimum?