The Science behind Givers Gain®, BNI’s number one core value and guiding philosophy 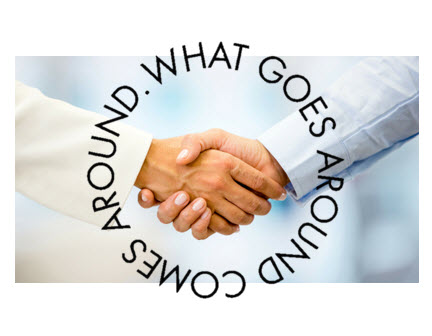 The Law of Reciprocity

Reciprocity is a hard word to say and I’m sure I’ll get to say it a lot through this education!

The Law of Reciprocity is also captured in Givers Gain®, our core, core value but what other laws or theories are there that support Givers Gain®?

For those who remember, Russell Crowe played the brilliant mathematician John Nash in the movie A Beautiful Mind.

Nash’s Equilibrium Theory states that the best result will come when everyone in the group is doing what is best for themselves and the group.

It is a form of reciprocity, and the optimal outcome of the situation is one where no individual has an incentive to deviate from their chosen strategy after considering the other participants’ choices.

Burrell Altruism is another form of reciprocity. It involves an equitable balance between collective altruism and personal need.

Even in early writings of Socrates and Tocqueville about ethics and government, the concept of enlightened self-interest was all about reciprocity.

Enlightened self-interest is a philosophy that states people who act to further the interest of others or a group or groups that they belong to, ultimately serve their self-interest.

Givers Gain® is built on the concept that, in a positive context, what goes around comes around. But it is more complex than that. Networking is about relationship building. The best way to build a relationship with someone quickly is to help them first.

If you can help someone, not in a charitable sense, by giving them an introduction, information, an article – anything that serves their need – you will begin a professional relationship with them and creating a relationship also helps build trust.

Trust is the cornerstone of effective networking so when you practice Givers Gain® often enough, you will be on the road to a powerful personal network predicated on trust built through helping to serve someone else.

Some of this is a little deep but it is important to understand that there is some philosophy and theory behind Givers Gain®.  Nash’s Equilibrium, Reciprocal Altruism, Enlightened Self-Interest, or Givers Gain®, if you do any kind of research, you’ll find what goes around comes around.

BNI builds communities all around the world where people support, get to know, and trust one another.

Growth is one of the 6 human needs, and it’s just as vital as significance and love ….

Three Steps BNI Members can use to Attract Referrals

A generous heart at BNI® is always rewarded

3 ways giving back can help your business...

Celebrate with your fellow BNIers and do business...