Home » What happens when we make presumptions and assumptions in business?
Be Inspired

What happens when we make presumptions and assumptions in business? 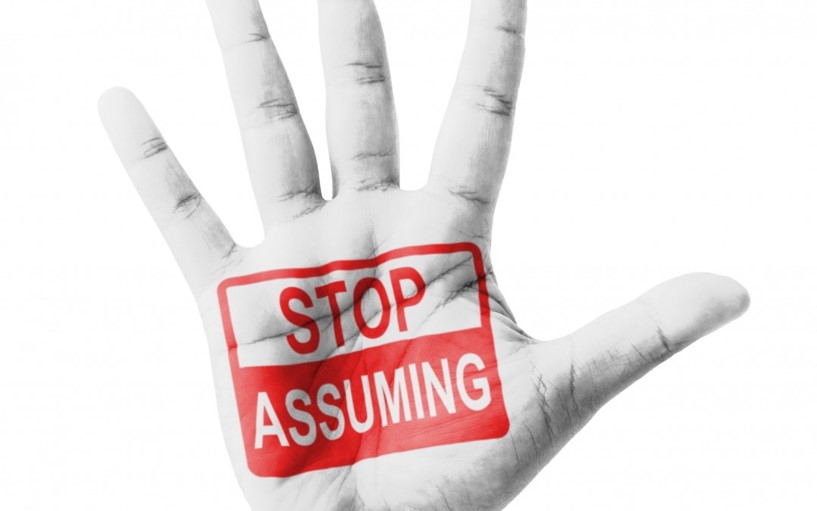 This is a True Story

My Grandfather was shaving early one morning during the late 1940s when the regular wireless (radio for the youngies) programming was interrupted by a public service announcement. Some men had escaped from the local psychiatric hospital and members of the public were asked to be on the lookout for them and, if spotted, to notify the authorities as soon as possible.

My grandfather finished dressing and made his way to his local bus stop. While he was sitting there, waiting for his bus, a man in pyjamas walked up to the bus stop. Startled and wary, my grandad watched the man in pyjamas take a seat next to him on the same bus stop bench.

After two miles or so, my grandad was totally puffed and decided to make his last stand. Putting his hands up, he prepared to fight. The patient ran up to him, touched his arm and said: “Tag, you’re it!” Then he ran away.
My grandad stood there watching as the patient in pyjamas ran away, and the bus he was supposed to catch roared past.

My grandad assumed he understood what was going on, but he really didn’t have a clue about what was going on in the patient in pyjamas’ head. Granted the man in pyjamas was a psychiatric patient so it would have been a challenge to know, but really, this kind of presumption is a common mistake that plagues us in business.

One danger of that kind of presumption is that we make ourselves the star of other person’s thoughts.  For example:

·She didn’t return my call, was it something I said?

·The price was too high. They’re tight with their money.

We create these stories about what we think is going on in the other person’s head and we are usually the star of the show, but we don’t have a clue and we are not as important as we think we are.

Make them the Star of the Show

If you want to build profitable business relationships with other people, make them the star of your show (not the other way around). How do you move from presumption to real understanding?

1.Maintain a high presence and visibility in their world. That’s why, in BNI, we meet weekly.

2.Add value. That’s why in BNI our focus is to give referrals rather than to receive. Engage the Law of Reciprocity and the receiving takes care of itself.

3.Build a relationship. That’s why in BNI we do one-to-ones and socials. The better we know somebody, the less we presume.

If you want to build a strong business relationship with somebody – stop assuming you understand what’s going on in their head and that you are the star of their show. Instead, make them the star of your show, and you will prosper.

Is the view through your windshield taking you...

Within our BNI Networking Meetings, Diversity is our...

BNI Quiz inspired by and borrowed from Chantelle...

How can your business save time and money...