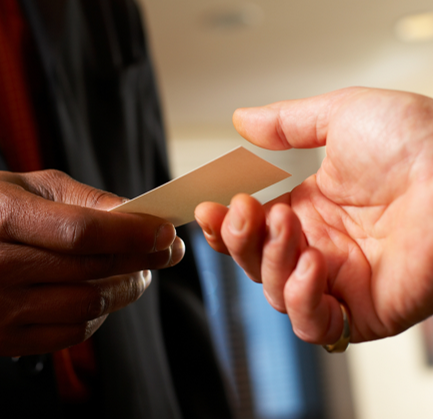 Recently Ray, the father of a BNI member, visited BNI Titirangi. After the meeting Ray explained to his son Graham Lockett, member and Visitor Host, that he had been to lots of networking events over the years and he thought that everyone in the room was going to try to sell to him… He was amazed that he had quite the opposite experience at BNI Titirangi; Ray felt that it was quite refreshing and not what he had expected. He now plans to use several members’ services as a result.

What Ray is describing is the “Networking Disconnect” and this week we are going to look how we can narrow or even reverse this phenomenon.

Who has been to a networking event like a Chamber of Commerce meeting looking to sell their product or service?

Who has been to a networking Event like a Chamber of Commerce meeting looking to buy from other attendees?

That is the Networking Disconnect. Going to sell at a networking event where everyone else is also looking to sell is counter intuitive and rarely works. It does sometimes, but it’s a bit like winning the lotto, it happens…… someone wins every week and so we are encouraged to keep buying tickets.

How does this relate to BNI?

Firstly, at BNI we believe in Givers Gain®. It is our philosophy and the first of our core values; we look to Give before we Gain and Giving is deeply rooted in our DNA. When we look to Give rather than Gain the Networking Disconnect narrows, then reverses when applied properly.

Secondly, we recognise that networking is more about farming, than hunting. As we move from Visibility through to Credibility, a process that takes time and effort to build deep meaningful relationships, we remove the Networking Disconnect which can lead to Profitability.

So, does attending networking events mean you are wasting your time? Not at all. Just be aware that if you are trying to make a sale, so is everyone else. Approach them as an opportunity to find people to build business relationships with through subsequent contact, i.e. you have to follow up on those contacts to see if you can help THEM, not just to add the pile of cards on your desk.  And of course, occasionally you might strike gold by accident.

BNI is unique in that it is designed to help us to remove the Networking Disconnect through Givers Gain® and the VCP process. Following these principals means your networking activity becomes more about farming than hunting leading to profitability through word of mouth referral marketing.

What type of Networker are you really?